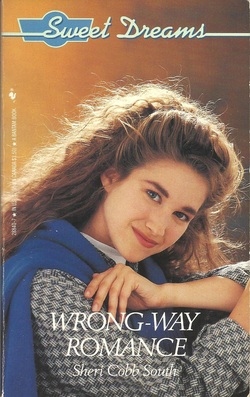 As I write these words, I’m packing my bags (okay, I ought to be packing my bags) for a trip to Denver for RomCon, a 3-day conference for readers and fans of romance. Although I’ve been to writers’ conferences galore, this is my first experience with a fan-centric function. I’m not quite sure what to expect, but I wouldn’t be a bit surprised if, at some point during the weekend, someone comes up to me and says, “I know who you are! You wrote Wrong-Way Romance!”

And they would be right. Way back in 1990, I sold my first novel, and a year later, in February 1991, Wrong-Way Romance was published by Bantam Books as part of its popular teen romance series, Sweet Dreams.

I went on the write four more Sweet Dreams titles—which have since then been translated into Polish, Chinese, Dutch, and French—but that first novel must have struck a chord that none of the others were able to match. If you look them up on Amazon or Bookfinder.com, you’ll find that used copies of most of them can be had for mere pennies—except for Wrong-Way Romance, which as of this writing can’t be found for less than $270. Yep, a 136-page paperback that originally sold for $2.95 is now listed for almost 100 times that amount–an increase of over 9000%. Not only that, but scarcely a month goes by that I don’t get an email from someone in their 30s who remembers reading that book as a teenager, and wonders if I have old copies to sell. (The answer is “no”; this was, after all, my first novel, and I didn’t know that I should buy up as many copies with my author discount as I could afford. Then again, who knew that it would be commanding those prices more than twenty years later?)

But wait; there’s more. I’ve been to more than one writer’s conference where another attendee, upon seeing my name badge, exclaimed, “You’re the one who wrote Wrong-Way Romance! That’s the book that made me want to read, and then write, romance!” At the close of the 2012 conference of Romance Writer’s of America, I met a finalist in the Golden Heart Awards for Best Young Adult Novel on the van taking a load of conference attendees back to the Los Angeles airport. When she learned who I was, she told me that was the book that led her to write for teenagers. After she got off the van, another woman told me, “That gave me goosebumps!”

It gives me goosebumps, too. And yet . . . sometimes it’s frustrating, living in the shadow of my first published novel. Some part of me wants to say, “Have you tried reading what I’m writing now?”

Don’t get me wrong. I am genuinely humbled to think that something I wrote more than twenty years ago is still being read, much less influencing people’s lives, today. It’s the sort of thing most of us as writers dream of.

But at the same time, I would hate to think that I peaked with my very first novel, and that it’s all downhill from there. I know that my writing is more finely crafted today than it was then, and my current novels, set in Regency England, are much more demanding, as they require more research and are over 2½ times as long in terms of word count.

I suspect part of the problem, if it can be called a problem, is simply the fact that Wrong-way Romance was a book written for, and read by, 12- to 14-year-olds—in other words, readers at an age where their tastes, preferences, and life goals are still being formed. I can still remember quite plainly books that made an impact on me at that age—or even younger—and my discovery of Georgette Heyer at age sixteen was certainly a watershed moment. But although I’ve discovered authors as an adult that I read (and re-read) faithfully, I can’t think of any who have had a truly life-changing impact on me. This is not to say anything against those writers; it’s simply that I have more of a backstory of my own, so to speak, and each individual book I read is a smaller percentage of the whole than it would have been when I was, say, thirteen years old, reading voraciously for a glimpse of what life “ought” to be like.

And, in all fairness, I’m not the same person I was twenty-five years ago, when I wrote Wrong-Way Romance. Ironically, I quit writing for teenagers about the same time my daughter and her friends began reading in the genre; suddenly I was looking at those high school years as someone’s mother, instead of writing from the perspective of the insecure teenager I once was. Maybe that’s why most successful young adult authors are still young themselves.

And so I’ll keep plugging away at Regency England, aware that lightning of the sort that was Wrong-Way Romance probably won’t strike twice. In the meantime, Ethan Brundy of The Weaver Takes a Wife has a devoted contingent of fans, and John Pickett of the mystery series got me noticed by both Publishers Weekly and Kirkus Reviews.

And maybe that, added to the early success of Wrong-Way Romance, is all any writer has any right to hope for.

1,208 thoughts on “Living in the Shadow of WRONG-WAY ROMANCE”