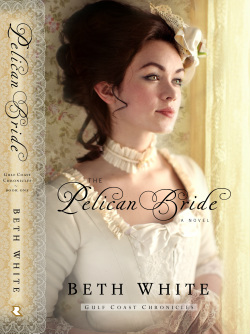 The “Pelican” of the title refers to the ship Pélican, which sailed from France to what is now Mobile, Alabama in 1704, with brides for the colonists. Among the young women is Genevieve Gaillain, a Protestant Christian escaping persecution in Catholic France. But Genevieve soon discovers that a new world doesn’t necessarily promise love or happiness, or even the safety and security she craves.

In the past, Christian fiction has been criticized (often rightfully so) for featuring too-good-to-be-true characters who face trite conflicts which are resolved with simplistic solutions. The genre has come a long way in recent years, however, and nowhere is this welcome change more evident than in Beth White’s meaty historical romance, The Pelican Bride. Contrary to many of the Christian romances you may have read in the past, everyone does not get “saved” by the end of the book, and of those who do, their experience appears to be more of a gradual process than a sudden “Damascus road” experience. Likewise, White leaves unresolved the question of whether Genevieve is doing the right thing by hiding her Protestant faith in a Catholic colony. Readers who look for more overt evangelism in their Christian fiction may find this ambiguity disappointing, but I found it both realistic and refreshingly honest.

It’s a pity, really, that The Pelican Bride is labeled as historical romance, for it doesn’t fit easily into so small a box. In a way, it’s more of a historical novel with elements of romance, as both the lead and secondary couples spend a significant portion of the book apart. The action during these separations never drags, however, for there’s plenty going on in the young French colony located in what is now southern Alabama, including Indian raids, threats from the rival British, and political conflicts in the faraway mother country—to say nothing of the humidity, mosquitoes, and torrential rainfall. White deserves high praise for tackling a little-known period of history, many of the details of which have been lost to antiquity. In the absence of hard and fast evidence (after all, no one saw the need to write down explanations of the minutiae of colonial life, since it was assumed that everyone at the time knew how to bake bread, load a musket, etc.), she had to deduce what she could from the known details, supplemented by her own imagination.

And I, for one, think she does a fine job. The only misstep for me came when I ran across a couple of brief references to men buttoning up their shirts; the shirts of the time would have pulled over the head, with a single button-and-loop closure at the neck. Also, the wording in a couple of places jerked me briefly out of the story, once when a young Indian slave girl “squared her mouth” (I never did figure out what that meant) and another time when a male character’s eyebrows “hooked together over his nose.” I knew what she meant—his eyebrows drawing together to indicate concentration, disapproval, etc.—but I was briefly distracted by the ludicrous mental image of the man’s eyebrows linking together. This is a personal preference, though, and other readers may not find it bothersome at all. More troublesome, as far as the conventions of romance go, was the Big Reveal at the end, which lost some of its angst due to the fact that much of the subject had already been discussed some 65 pages earlier. As I said, though, in some ways this is more of a historical novel than a romance, so it is perhaps unfair to judge it by the conventions of the romance genre.

In sum, The Pelican Bride is a richly textured tapestry of a book sure to please anyone who wants an inside look at an all-but-forgotten time in our nation’s history, as seen through the eyes of the people—some real, some imagined—who struggled to create a home out of the wilderness. Highly recommended.