Last time I was in London, I posted a blog sharing some of the places that would have been familiar to John Pickett, the young Bow Street Runner who is the hero of my Regency-set mystery series. Since I had a chance to visit Scotland this past summer as part of a 2-week British Isles cruise, it only makes sense to give his magistrate, the real-life Patrick Colquhoun, equal time.

While our ship was docked at Greenock, my husband and I arranged for a car and driver—Mike made it very clear that he did not intend to spend his vacation learning how to drive on the wrong side of the road!—to take us to some of the places that would have been familiar to Patrick Colquhoun.

Dumbarton Castle, as seen from across the River Clyde

Our first stop was Dumbarton, where Patrick Colquhoun was born in 1745. You can see Dumbarton Castle long before you get there, as it is situated on the north bank of the River Clyde—directly across the river from the road that connects Greenock to Glasgow, which means you must go some way past it before you can cross the river and backtrack. It is visually quite imposing, built on a volcanic plug that has been fortified since the Iron Age, and would certainly have been a familiar sight to our man. 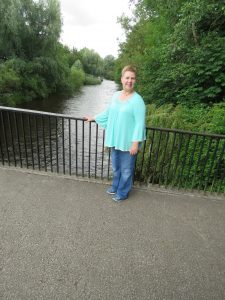 Me, standing on a bridge overlooking the River Kelvin.

His wife, Janet (whose maiden name was also Colquhoun), was also from here; in fact, her father was the provost (think “mayor”) of Dumbarton. Going his father-in-law one better, Patrick Colquhoun became Lord Provost of the much larger Glasgow—a position which meant he was also Lord-Lieutenant of the County of the City of Glasgow and a Commissioner of Northern Lighthouses. He built an estate in Glasgow’s West End, along the River Kelvin, and called it Kelvingrove. The house no longer stands (and, alas, he sold it in 1792, some years after moving to London, which means I can never send John Pickett there), having become Glasgow’s first municipal museum in 1872 and demolished in 1899, when the Kelvingrove Art Gallery and Museum was built in its place. Its grounds were absorbed into what is now Kelvingrove Park. I spent a very pleasant hour wandering through the park and along the river, imagining myself following in his footsteps.

Kelvingrove Park. The spires of the Kelvingrove Art Gallery and Museum are visible in the background.

One thing I noticed was that the locals seemed very gratified to discover that I knew how to pronounce “Colquhoun” correctly! (For the record, it’s “Ca-HOON.”) Upon learning what I was doing there, more than one boasted that, yes, “Glasgow is Colquhoun country,” and asked if I had visited Luss. I was pleased to tell them that I had.

Luss, besides being a picturesque little village on the shores of Loch Lomond, is the ancestral home of Clan Colquhoun. Although he was never chief of the clan, not being in the direct line of succession, Patrick Colquhoun would certainly have been aware of the connection, and might well have visited the village or the ancestral seat, a fine Georgian manor called Rossdhu House. 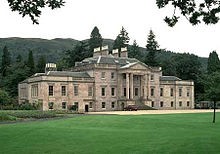 Rossdhu House. Since I didn’t get to see it in person, I looked it up online!

(Rossdhu, by the way, now serves as the clubhouse of the Loch Lomond Golf Club, and still contains many of the original furnishings and artwork, on loan from the family. My driver tried to get me close enough for a glimpse of the house, but the gates were locked, and the landscaping blocked any view; apparently they’ve seen me driving off the tee.) 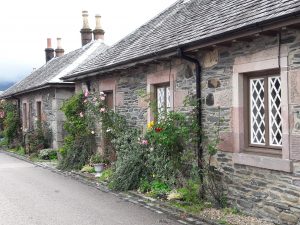 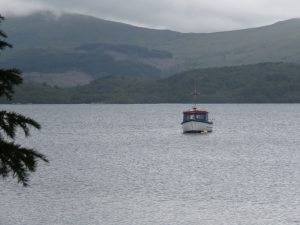 Foiled in my attempt to get a look at Rossdhu, I had to content myself with strolling through the village and down to the loch, finishing up my time in Luss by trying haggis (yes, really!) at the Loch Lomond Arms Hotel, a former coaching inn owned by the present clan chief, Sir Malcolm Colquhoun, 9th baronet of Luss. 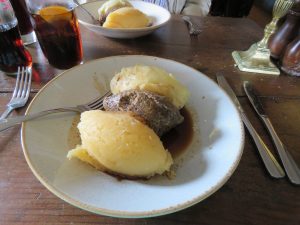