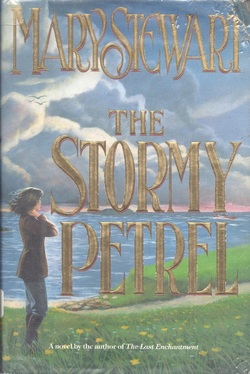 My guest blogger today is the great romantic suspense novelist Mary Stewart! Okay, I’ll admit, I didn’t get to interview her, much less meet her in person, but something I came across recently in one of her novels really spoke to me, and I thought other writers would enjoy it, too.

First, a little backstory: for reasons I’ll probably never understand, my current work in progress insisted on being set on the west coast of Scotland. As you might imagine, this would have been a lot easier if I could afford to go to Scotland myself, but the money just isn’t there right now. So I researched as best I could, and finished my rough draft yesterday. In the meantime, I discovered that a novel by Mary Stewart which I had somehow missed, The Stormy Petrel, was set in the Hebrides, the islands off the western coast of Scotland. I decided to treat myself to a “new” book by an old favorite, and at the same time compare her vision of Scotland(which she has no doubt seen!) with mine.

It was on page 110 that I made a discovery far more universal than any fictional portrayal of
Scotland. For it was on this page that Ms. Stewart’s first-person heroine, a novelist, struggled
with writer’s block. Here is how she describes it:

“From experience, I knew what to do. Write. Write anything. Bad sentences, meaningless sentences, anything to get the mind fixed again to that sheet of paper and oblivious of the “real” world. Write until the words begin to make sense, the cogs mesh, the wheels start to turn, the creaking movement quickens and becomes a smooth, oiled run, and then, with luck,
exhaustion will be forgotten, and the real writing will begin…

“[So] I wrote. A year or so later, or it may have been an hour, I crumpled up four sheets of paper and threw them to the floor, and started another, and I was there. And in another light-year or two I was through the word-barrier, and the book had suddenly reached the stage—the
wonderful moment to get to—where I could walk right into my imaginary country and see things that I had not consciously created, and listen to people talking and watch them moving, all apparently independent of me.”

Wow! While I may never enjoy Mary Stewart’s success as a writer, I know exactly what she is talking about. For although these words may have belonged to the fictional Rose Fenemore, is there any doubt that they were based on Ms. Stewart’s own experiences as a writer? I, too, have had those moments when I was not writing so much as I was simply narrating what these
people—my own characters—were doing, as I watched the story unfold in my mind like a movie on a screen. And in spite of all the frustrations of writing, which are many—the isolation, the rejections, the endless editing, the shrinking advances, the self-doubts—this, this, is why I write.