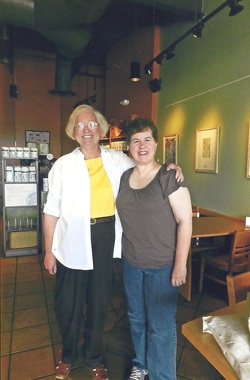 I have a confession to make: I’ve never been a very disciplined writer. After all, I’m an Artist. As everyone knows, Artists work when—and only when—they are inspired by their muse. And if my muse decides to take a pet and not show up for a few days—or weeks, or months—well, that’s not my fault, is it? My muse will return when it’s Time.

All that changed when I had coffee with Connie Willis, winner of multiple Hugo awards and perhaps the premier science fiction writer in the country. My daughter is a major Connie Willis fan girl, so shortly after moving to Colorado, I contacted Connie Willis and asked if she would be willing to autograph a book for my daughter’s birthday. She agreed, and we met at a Starbucks in Greeley, where she is apparently a regular fixture.

We talked for an hour, and during the course of our conversation, she told me she does all her writing at Starbucks; when she tries to write at home, she said, she looks around the house and sees all the other things she “ought” to be doing instead.

Hmm, I thought, that sounds familiar. So the next morning, I took my laptop and went to Starbucks (not the same one; I don’t stalk Connie Willis). I discovered that the internet connection there, while okay for the occasional bit of research, is too slow for efficiently posting status updates to Facebook, reading and replying to email, playing Candy Crush, and all the other things that tend to distract me when I’m on the computer. By the time I left Starbucks an hour later, I’d written a thousand words—and all without a peep from that fickle muse.

Since that first visit to Starbucks, I’ve written three novels of 65,000 words each, sold two of them, and started a fourth, which at the time of this writing is about 20% complete.

Thanks, Connie. I needed that.