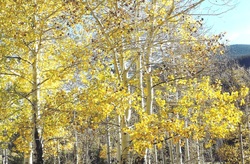 Two years ago at this time, things were not going well at the South domicile. Mike (having been let go by Ciba after 28 years) had just taken a job paying 1/3 of his previous salary. While it helped his severance package stretch further, we knew it was only a temporary fix. Trevor had just started his freshman year at the University of Alabama. How were we to pay for it all? Friends and family, no doubt trying to lighten a bleak situation, laughingly urged me to “write fast!” Instead, I couldn’t write at all. I was stuck halfway through the manuscript that would become Babes in Tinseltown, too worried and anxious to write. And even if I finished the book, how could I submit it? I didn’t know what my home address might be by the time an editor made a decision on it.

Fast forward to October 2012. Now I sit at my computer,  looking out my office window at the vibrant fall colors across the street. The  ash and aspen trees are such a bright yellow they almost hurt my eyes, and  beyond them the eastern face of Long’s Peak is dotted with pockets of snow. Mike has a new job that he enjoys, one that pays a little more than he’d been making at Ciba. Trevor is no longer at the University of Alabama; he’s joined the U. S. Air Force and will be leaving for basic training in December. Babes in Tinseltown is not only finished, but selling well and garnering positive reviews, and I’m halfway finished with a new book, the third in the John Pickett mystery series.

We’ve been very fortunate, but I won’t pretend it was easy. Unlike books, life won’t let you peek at the ending to make sure everything works out happily. Even after Mike had the job offer in hand, it was scary selling a house that was paid for, moving across the country, and buying a new house in a more expensive area. But sometimes risk is necessary for reward,
and sometimes a crisis can thrust you out of your comfort zone and into new opportunities that wouldn’t have arisen otherwise.

The same thing has happened to me (albeit much less dramatically!) several times in my writing career. In 1995, I was quite happily writing teen romance for Bantam’s Sweet Dreams line when the series was cancelled. After five published novels, I’d joined the ranks of authors
“orphaned” by their publishers. What to do? Fortunately, there had been rumblings for the last couple of years that the series might be on its last legs, and I had already been toying with the idea of trying my hand at a Regency romance for grown-ups. But by the time I had finished it, the Regency market had collapsed, with first Fawcett, then Signet, and finally Zebra dropping their Regency lines. Having by now finished my second Regency romance, I believed in The Weaver Takes a Wife so strongly that I took a chance and published it myself.

The large-print sale of TWTAW and its sequels opened a door for me to sell my Regency-set mysteries to Five Star, who published them in hardcover editions for the library market. When Babes in Tinseltown turned out to be too short for Five Star’s required word count, I was forced to return to self-publishing, and found it a very different world from the one I’d known at the turn of the 21stcentury. Print on demand and electronic rights have put much more power in the author’s hands, with a much smaller financial investment than it had been  before. When I finish the third John Pickett mystery, I’m going to face some tough decisions: do I offer it to Five Star, or do I publish it myself? Five Star now retains electronic rights to the books they acquire; am I willing to surrender those rights in order to get a larger advance up front, or do I delay payment in order to put a more affordable product into the hands of readers sooner rather than later?

These are strange and unsettling times in the publishing world, but as I look back over the events of my own life over the past two years, I’m reminded that a crisis is sometimes an opportunity in disguise.