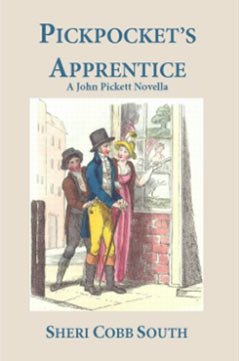 Also available in Paperback at Amazon and Barnes and Noble

When magistrate Patrick Colquhoun orders a habitual thief and ne'er-do-well transported to Botany Bay, he doesn't realize a fourteen-year-old boy has been left behind to follow in his father's footsteps-not until young John Pickett is hauled into Bow Street for stealing an apple from the produce market at Covent Garden. Feeling to some extent responsible for the boy, Mr. Colquhoun prevails upon Elias Granger, a prosperous coal merchant, to take him on as an apprentice.

For the next five years, John Pickett hauls coal in exchange for room and board. The work is dirty and hard, but the drudgery is lightened by the occasional deliveries to Bow Street, where Mr. Colquhoun usually tosses Pickett a coin for his pains. An even more pleasant diversion exists in the form of Mr. Granger's pert daughter Sophy, with whom Pickett tumbles headlong into love.

And then one day nineteen-year-old John Pickett stumbles by accident into a criminal investigation that will bring him once again to the attention of Bow Street for an entirely different reason, and will change the course of his life . . .

Pickpocket's Apprentice is a prequel/novella that traces John Pickett's journey from a 14-year-old pickpocket to a 19-year-old offered a place on the Bow Street foot patrol. No, it isn't a romance, but you might say it's a love story of a different sort, as it establishes the father-son relationship between John Pickett and his magistrate, Mr. Colquhoun.