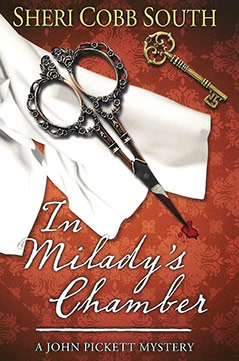 Estranged from her aristocratic husband through her failure to produce an heir, Lady Fieldhurst resolves to repay his neglect by taking a lover. Fate takes a hand when she and her paramour enter her bedchamber and find Lord Fieldhurst lying on the floor--with her nail scissors protruding from his neck.

Idealistic young Bow Street Runner John Pickett has spent most of his brief career chasing petty pickpockets. Nothing in his experience has prepared him for low dealings in high society--or for the beautiful widow who is the chief suspect.

The popular press sees the case as a classic lovers' triangle and expects a quick arrest, while back at Bow Street, the magistrate questions Pickett's handling of the case in the light of his unprofessional interest in Lady Fieldhurst. Still, Pickett remains unconvinced. If this was a simple crime of passion, it must have seemed a godsend to George Bertram, the viscount's cousin and heir presumptive, whose wife's ambitions have driven him to the brink of bankruptcy. Was it Mr. Bertram who paid a nocturnal call upon his lordship and was apparently the last person to see him alive? And why did the butler vanish without a trace shortly after admitting the mysterious visitor? What is the cryptic letter appropriated from the dead man's desk by his Foreign Office colleague while paying a condolence call?

Under increasing pressure from without and within, Pickett must race against the clock in order to uncover the true murderer and save an innocent woman from the gallows.