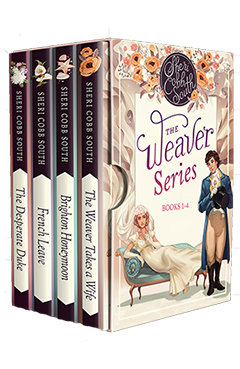 Four witty and romantic Regency frolics suitable for all ages.

THE WEAVER TAKES A WIFE

Haughty Lady Helen Radney is one of Regency London’s most beautiful women and the daughter of a duke, but her sharp tongue has frightened away most of her suitors. When the duke loses his fortune, he turns to his last remaining asset: his daughter.

Enter Mr. Ethan Brundy, once an illegitimate workhouse orphan, now owner of a Lancashire cotton mill and one of the richest men in England. When he glimpses Lady Helen at the theatre, he is instantly smitten and vows to marry her. But this commonest of commoners will have his work cut out for him if he hopes to win the heart of his aristocratic bride…

Sir Aubrey Tabor began with the most altruistic of motives. When the Brundys’ seaside wedding trip is interrupted by a young woman claiming to be Mr. Brundy’s sister, Sir Aubrey promises to do what he can to relieve his friend of an imposter whose presence poses a threat to marital bliss.

But Polly Hampton proves to be more than a match for Sir Aubrey, and with each encounter, he finds himself thinking less of his friend’s honeymoon, and more about having one of his own…

Forced by bankruptcy and scandal into exile in France, Lord Waverly expects never to return to his homeland until, staggering home from a gaming hell before dawn, he encounters a young novice escaping a convent. Waverly reluctantly agrees to take her to her English grandfather.

Alas, he soon realizes the enormity of his task. When he delivers the irrepressible Lisette to her grandfather’s home only to discover that the man is dead, Waverly is left with no alternative but to offer her the protection of his name. But this marriage of convenience is likely to prove very inconvenient indeed…

When his father’s death makes 23-year-old Theodore Radney the Duke of Reddington, the weight of his new responsibilities is enough to send him to London in a panic. Soon Theo has accumulated a pile of debts—and can’t touch his inheritance until his father’s will is probated. His brother-in-law, Ethan Brundy, agrees to lend him the money, if Theo will work in the mill until probate is granted.

Daphne Drinkard and her mother are forced to take in boarders after the death of her father. When a Parliamentary candidate hires a room for a series of meetings, Daphne sees her last chance to salvage their fortunes. Still, she’s far more intrigued by the newest resident. Mr. Tisdale is obviously a gentleman—but why would a gentleman be working in a mill?